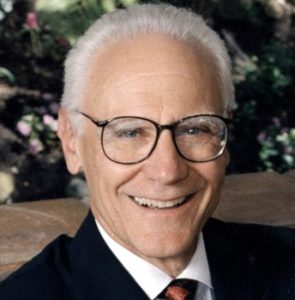 In 1956 he partnered with Eli Luria forming the Luria-Towbes Company, building homes in Los Angeles and Santa BarbaraCounties.  In the early 1960’s he started his own company, developing and building residential, commercial and industrial properties in Santa Barbara, Ventura and San Luis ObispoCounties.  He has built over 5,500 housing units, as well as shopping centers, office buildings and business parks.

Mr. Towbes is one of Santa Barbara’s leading philanthropists, serving on innumerable local nonprofit boards; among them are Cottage Hospital, the Santa Barbara Center for the Performing Arts, the Housing Trust Fund of Santa Barbara County, and the UCSB Foundation.  Each year his bank, Montecito Bank & Trust, has a “Community Dividends” luncheon awarding donations totaling $1,000,000 to 100 non-profits.

He has been recognized as Santa Barbara’s Man of the Year in 1995, recipient of the initial New-Press Lifetime Achievement Award, and the UCSB Chancellor’s Medal.  He was chosen as Santa Barbara Philanthropist of the Year by the National Society of Fund-Raising Executives and more recently as its Volunteer of the Year.

​He has two daughters, Lianne and Carrie.  He was married to his late wife Gail for 42 years until she passed away in 1996.  Last September he began a new chapter in his life with his marriage to Anne Smith, who is a volunteer and philanthropist.