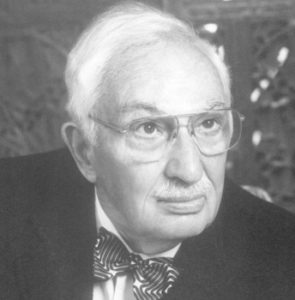 Herbert D. Tobin, retired, was formerly President of Frank I. Tobin and Sons, a family firm engaged in construction and development for over four generations. He holds a degree from Harvard University.

In 1937, he helped establish one of the first chapters of the Building Contractors Association in America. Currently, this organization is known as the National Association of home Builders.

He helped found the B.A. degree program in Real Property Development and Management at the University of Southern California in 1978. He is the author of a Graduate Degree Program called Master of Environmental, Construction and Development Management.

Mr. Tobin has written numerous articles on "No Growth and Urban Planning" which were published in the Trade Press and in national media. Herb drafted a team that raised several hundred thousands of dollars to finance three major industry/government studies, plus two private seminars, for judges on problems of Growth and No Growth.

Mr. Tobin served as a Director of the Urban League in the mid-1950's and was a member of the Los Angeles Sheriff s Mounted Posse and a sworn reserve deputy for 25 years. He led the first major and successful civil rights defense of an African American in Orange County.

Herb is a member of the Committee on Continuing Education of the Harvard Alumni Association, the Executive Committee for the Kennedy School Institute for Middle East Social and Economic Policy, and the Board of the California Council for Environmental and Economic Balance. He is also founder Chairman of the Board of Sponsors for the Ben Gurion University Center for Jewish/ Arab Understanding, an organization for which he orchestrated a drive that generated close to a million dollars in endowments.

​Herb lives in Newport Beach with his wife, Libby. They have one daughter, Anabel, and two grandsons, Kip and Kern.