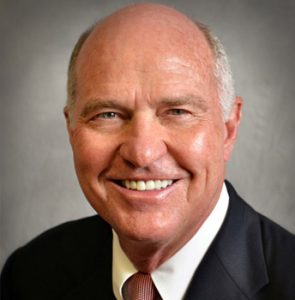 Tom Sudberry is the founder and Chairman of Sudberry Properties, a San Diego-based company that develops and manages retail, multi-family, mixed-use, town centers and master-planned communities in Southern California. Over the past 34 years, the company has developed more than 8 million square feet of property with a combined market value exceeding $2 billion. The family-owned company, which is now presided over by Tom’s son, Colton, is known for gaining entitlements for particularly difficult and complicated properties.

Earlier, he was a U.S. Naval Aviator and served on two Vietnam combat cruises.

Sudberry received his bachelor's degree in mechanical engineering from Rice University in Houston, Texas, and his MBA from Stanford University. In 2003, he completed the Advanced Management Development Executive Program from the Harvard University Graduate School of Design.

He is involved in numerous business and industry organizations and currently serves on the board of the San Diego Economic Development Corporation and the Greater San Diego Regional Chamber of Commerce. He is also active with ICSC – the International Council of Shopping Centers, the Congress of New Urbanism, Urban Land Institute, National Council for Urban Economic Development, the San Diego and North County Building Industry Association chapters and the University of San Diego’s Burnham‐Moores Center for Real Estate.

​Throughout his career, he has been an enthusiastic philanthropist and community leader. Sudberry has been a member of the board of directors of the San Diego River Park Foundation, Impact Urban America, Move San Diego, Father Joe’s Villages, Santa Fe Christian Schools, the USS Midway Museum and the YMCA. He is the former Chairman of the Board of The Lincoln Club.