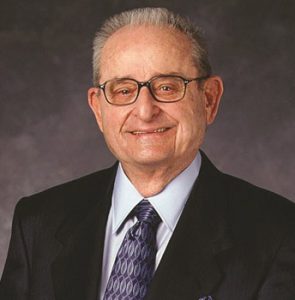 Born in 1923 in Stockton, Alex Spanos developed his tireless work ethic as an 8-year-old in his father's restaurant. In 1951, Spanos borrowed $800 and purchased a truck to start his own catering business. With his initial profits, he began to invest in real estate. By 1960, he formed his first construction company and proceeded to build apartments in the area. A tough competitor, Spanos pursued his goals with unflagging enthusiasm, setting personal and business records each succeeding year.

Today, Spanos is the chairman of 10 companies and has built more than 100,000 apartment units and more than 3 million square feet of commercial property in 18 states. In 1984, Spanos, an avid sports fan, fulfilled a lifelong dream by buying an NFL team: the San Diego Chargers.

​Over the years, Spanos has contributed to countless charities. In recognition for his commitment to community, Spanos has received numerous honors and awards, among them the Horatio Alger Award, the Statue of Liberty-Ellis Island Medal of Honor, the Starbright Foundation’s Heart of Gold, and the Anti-Defamation League of B’nai Brith’s National Distinguished Community Service Award for devotion to community and concern for others.