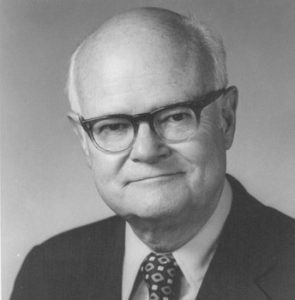 Harold W. Smith had been active in real estate and the building of custom homes all his adult life. He became a real estate salesman in April 1934, and was a top salesman until 1942 where he joined The Grove Regulator Company for the duration of the war. After V-J Day, he joined The Berkeley Real Estate Board where he became the Director and its President in 1949-50. Later, he was a Regional Vice President of the California Real Estate Board. Harold always specialized in new homes, working with builders. He was Sales Manager for Mason-McDuffe in the Park Hills development and he started building with his own crews in 1938.

Always working for certification of the various building groups, he played a key role in uniting the Alameda County and Contra Costa Building Associations. He also worked hard with other Hall of Fame Honorees, Paul Peterson and Emmett Clifford in forming the Home Builders Association of Northern California. Smith also had been a Director and Life Director of the National Association of home Builders.

Harold once said, "I feel the most rewarding part of my more than 50 years in real estate and building has been my participation in the Industry Associations. I am also proud of my work as a three-term school board member in Danville." Harold had also been head of a Boy Scout troop and, like his father, had been active in Rotary for 40 years. He was also a Trustee of John Muir Hospital in Walnut Creek, California.

​Harold is survived by his wife, Martha and their three children, all of whom are involved in building quality custom homes. Smith's two sons are active leaders in Building Industry Association work, and both have been President and Chairmen of the Home Builders Association of Northern California. Both sons have been recipients of the Association's President Award for industry contributions.