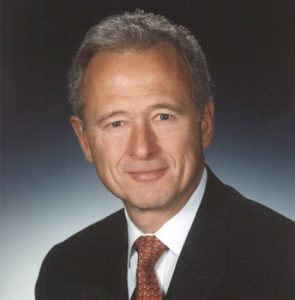 Bruce C. Smith is President of Smith Quality Homes, a family-owned company with a 65-year history of quality projects and community involvement. Bruce was also the 2001 President of the 205,000-member strong NAHB.

A fourth-generation Californian, Bruce is a second-generation custom homebuilder and land developer who has been involved in the business since he was about 7 years old, sweeping the floors of new homes for his father Harold, a former Hall of Fame honoree. Bruce and his brother, Randall, have diversified into remodeling, office and light commercial construction, and property management.

Bruce earned his Bachelor of Science degree from Menlo College in Menlo Park, and his Master of Business with honors from the University of California at Berkeley. “I wasn’t really sure what I wanted to do until I got out of college; I was just living life,” Smith says. “But I was on the path to be part of the industry.”

Bruce says the most satisfying aspect of his job is to be involved in creating communities and homes. “You have physical evidence of your efforts,” he says, saying his father felt the same way. Bruce can still vividly remember driving around with his father to take pride in the neighborhoods and homes he created.

Bruce has been a strong voice for the industry, representing homebuilders at the local, state, and national levels. He served on the Board of Directors for BIA of Northern California from 1978 to 1990, serving as the President in 1986. He is the only person to receive the Presidential Award twice from his local association. He also received the William J. Watson Memorial Award for extraordinary efforts on behalf of the building industry in 1985.

Bruce’s state service also comprises of appointments to various boards and groups, including serving as trustee for the Carpenter’s Trust Fund in Northern California; Chairman of the California Construction Industry Advancement Fund; 2001 President of the National Association of Home Builders (NAHB); a member of the advisory board to the Graduate School of Business at UC Berkeley; and served as president of PCBC in 1998, the annual homebuilding trade show sponsored by CBIA.

On the national level, Bruce served as an NAHB Representative in 1995 and 1996 and was a National Vice President of NAHB during 1997. He also served in numerous leadership roles during his years as a member of NAHB. He has chaired the Legal Action Committee, the Budget Committee, and the Endangered Species Act Working Group where he was responsible for designing association policy.

His major accomplishments include co-authoring a proactive litigation policy, forging the way for NAHB to become actively engaged in legal issues like property rights and wetlands. He also co-authored an investment policy and a reserve policy. Bruce is a Life Spike and has consistently service on the NAHB Board of Directors since 1983 and was named a Life Director in 1995.

One of Bruce’s goals as NAHB president was to shift direction of the association and become more aggressive in legislative and membership issues. Serving as President in 2001, Bruce led the association at a dynamic time — a new century, a new administration, and a new Congress.

He says one of his key accomplishments was engaging the grassroots members on the national scene, bringing national politics to the local level.

“I think of my greatest achievements would have to be energizing the average builder to be involved in the process and bringing forward to the 21st century advocacy, financial structure, and legal action,” he says.

Bruce is also proud of the fact that he brought a Western perspective to NAHB.

“But the Western perspective, is I think, far more open, much more of a ‘can do’ attitude, a very strong defender of fundamental freedoms than I believe any other region in the United States,” he said in an interview with California Builder magazine.

Bruce says the biggest change he’s encountered in his years in the industry is the rise in litigation and oppressive litigation.
“But despite the problems, it’s still the greatest industry and the greatest part of the free-enterprise system,” he says. “I feel very fortunate to provide housing to Americans.” Bruce is a firm believer that one person can make a difference politically.

“It is amazing how much difference one person can make,” he has said. “I don’t think that builders really understand the power of their constituency. We represent, as a building community, five percent of the gross national product of the country. There are over eight million employees engaged in the housing industry and we should have a significant input and influence on the decisions that are made to provide housing for our country.”

Bruce says the future of California’s housing industry lies with the industry itself.

“I’ve witnessed where one builder can literally change the mind of the majority leader of the Senate on a major piece of legislation,” he has aid. “The key to housing affordability production in the future really lies in the hands, and the solution of it, lies in the hands of ourselves. If we get engaged, we can change the dynamics and end up succeeding in providing affordable housing, providing the American Dream.”

​Bruce lives in Walnut Creek, and has three daughters and one granddaughter. He enjoys sailing, running, horseback riding, and — most of all — traveling with his family.