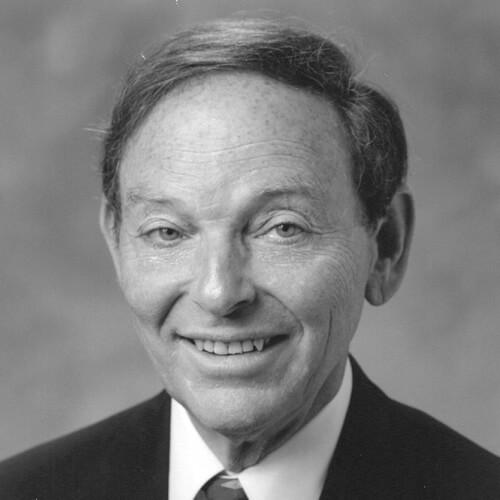 Michael L. Meyer is the Managing Partner of E&Y Kenneth Leventhal Real Estate Group's (EYKL) Orange County office, the largest group of real estate accounting and consulting professionals in Orange County. (Mike is set to retire from EYKL on September 30, 1998.) EYKL, a business unit of Ernst & Young LLP,is the nation's largest provider of audit, tax, and real estate advisory services to owners, builders, managers, lenders, and users of real estate. Mike Meyer has been a community and business leader in the county for 24 years.

One of Orange County's and Southern California's most influential real estate consultants, Mike joined Kenneth Leventhal Company in 1964 and opened the Orange County office in 1974. During his tenure, has filled an important advisory role in Orange County's fast growing and sometimes turbulent real estate industry. Mike and his firm have been key financial and business strategists, as well as accountants, to most of the county's largest real estate companies. Mike has actively consulted with these and other Southern California real estate companies through nearly every type of real estate cycle on issues such as transaction structuring, property dispositions and acquisitions, mergers, market and feasibility analysis, valuation, capital access strategies, and financial and debt structuring.

Mike is a long-time active supporter of the building industry and the BIA. He has been a member of the BWOC since he moved to Orange County from Los Angeles 24 years ago and has assisted the BIA in a number of county , regional and statewide initiatives. He has participated in Home Aid, Mame Awards, and other BIA sponsored programs. Further, when Home Aid began to expand, Mike and his firm provided accounting and financial advice. Also, when Home Aid joined forces to build Human Options, a safe house for abused mothers and their children, he served on the Building Campaign Cabinet. Mike then arranged for the project to be nominated for and selected by the Urban Land Institute for its Excellence in Community (Non-Profit) Award. During the county bankruptcy, Mike assumed a lead in working with the BIA to develop strategies for the local homebuilding industry to address the many issues related to the bankruptcy. He and his firm also sponsored a major conference for homebuilders to examine the impacts of the bankruptcy on the county's housing industry. Mike has been a media spokesman for the BIA and helped in the organization of its annual economic forecast.

Due to Mike's experience in and knowledge of the local economy and real estate markets, he participates on many industry panels and workshops and is widely quoted in the local and regional media. He is recognized by many housing industry executives as a futurist and an opinion leader, as well as being a columnist and featured speaker. Mike has been selected by the Orange County Business Journal as one of the county's top business leaders.

A committed volunteer in both industry and community organizations, Mike is immediate past chairman of the Advisory Board of the Real Estate Program of the UCI School of Management; member of the UCI Chief Executive Round table; a founder and board member emeritus of the Orange County Forum; Advisory Board member of the Lusk School of Real Estate Development at USC; director of the Construction Industries Alliance for the City of Hope; co-chairman of the United Way's Alexis de Tocqueville Society; board member of the Orange County Museum of Art; and is active in the Building Industry Association and Urban Land Institute. Mike has been honored by the Jewish National Fund (Tree of Life Award), American Jewish Committee (Human Relations Award). He was the 1997 recipient of the City of Hope Construction Industries Spirit of Life Award and the University of California, Irvine, Sumigarden Award in 1998.

​A native of Omaha, Nebraska, and graduate of the University of Iowa, Mikes lives with his wife, Nancy, in Laguna Beach and they have four children.