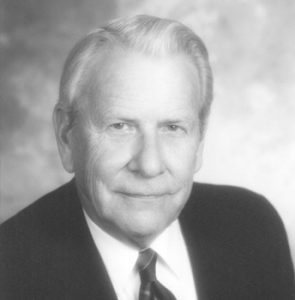 Dean P. La Field began his career in the building industry in 1951. He was affiliated with a home builder for nine years and also worked for a subcontractor, a materials manufacturer and as a financial consultant before joining the staff of the Associated Home Builders (ARB) of the Greater East Bay in October 1966.

In November 1985, La Field was presented the Building Industry Association's Chairman Award for long and outstanding service to the building industry. It was the first time in BIANC history that the prestigious honor was presented to a staff member. Dean also served as a Trustee of the California Building Industry Foundation for two years. La Field retired in 1991 on completion of 25 years of service to the Association.

A native of Connecticut, La Field attended Yale University before moving to California where he graduated from UCLA with a B.S. degree and a major in marketing. He served as an Officer with the U.S. Navy in the southwest Pacific Theater of Operations during World War II. It was his ship, the light cruiser, USS Nashville, which transported General Douglas MacArthur back to the Philippines to keep his "I shall return" promise.

​Although Dean has focused his career on the building industry, he and Peggy, his wife of over 49 years, have found time to be active in several youth and community groups while raising five children (including twins). The La Field's have 12 grandchildren and live in Walnut Creek.