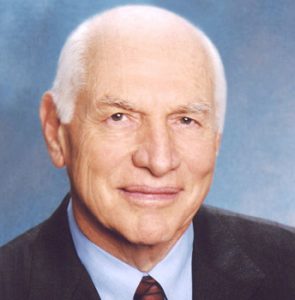 Michael I. Keston is the Chairman and Chief Executive Officer of the Larwin Company. Since its formation in 1948, Larwin Company has built approximately 50,000 homes in more than 140 communities and more than 2 million square feet of commercial property.

Michael joined Larwin in 1970 and was appointed President in 1975. At that time, Larwin was one of the three largest residential building companies in the United States operating in 10 states. Maintaining Larwin’s leadership position has been a goal for Michael who has guided the company through a changing homebuilding industry during the past three decades.

Today, Larwin builds for diverse customers – from single parents and couples without children to buyers wanting to live in communities with a golf course, near the ocean, in a certain school district or where they can keep horses. “The homes we build today are a reflection of the marketplace and the lives of the homebuyers,” said Michael, who said Larwin’s approach is personal. “We’re trying to develop something special for you” is the philosophy behind the way they do business. The foundation Michael has built for Larwin during the past 34 years has been a stabilizing force for where the company is today.

Michael and his wife, Linda, have responded directly to California’s anticipated population growth and the lack of infrastructure to accommodate that growth by providing a major endowment to establish the California Infrastructure Institute at the University of Southern California. The Institute will combine public policy outreach with university-level research that will help decision makers determine alternative solutions for California’s growth. Michael’s connection with USC starts in the classroom where he is an adjunct professor in the master’s degree program in Real Estate Development at USC’s School of Policy, Planning and Development.

​Michael is also a past director of the California State Chamber of Commerce and the Los Angeles Conservancy which is dedicated to the preservation of historic buildings in Southern California. He also is a member of the Executive Committee of the USC Lusk Center for Real Estate.

Michael enjoys traveling the world with his wife, Linda. They have visited Tibet, Peru, and China, have bicycled in New Zealand and France and fly fished in Alaska.