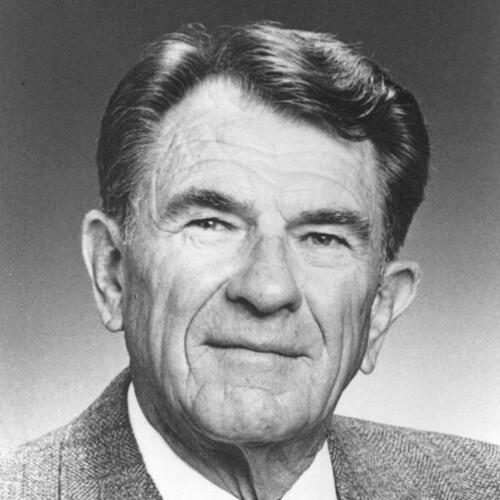 Although John B. Clark, Jr. is known as the premier fence builder in San Diego County, it was not always that way. John has been a high school instructor teaching radio, electricity, shop math and coached basketball at Verdugo Hills High School. He is co-owner of a NC7H, the seventh licensed helicopter in the United States. John joined the U.S. Marine Corps Reserves and served close to 30 months active duty, retiring as a Lt. Colonel. He also served 16 years as Devil Pup liaison officer for San Diego County.

Through help from his brother-in-law, John got started in the construction industry by opening a fence company in San Diego in 1947. He started building houses in late 1948. His innovative use of the concrete block foundation produced a highly competitive product for the no-down payment G.I. market as well as upper-end homes for the La Jolla Muirlands. Subsequently, John obtained his own B1, C13, C29, and C61 State Contractors licenses for the purpose of building houses, fences, walls, roofing systems and room additions.

John joined the San Diego Building Contractors Association in 1948. He chaired many of the committees, served as President in 1967, earned 202 spike credits, served as Trustee to the Carpenters Fringe Benefit Trusts for 19 years, and co-authored with Stanley C. Scott the San Diego Hometown Plan designed to get minorities into the construction industry. It received national recognition. He served nine years as a Trust for the Construction Industry Advancement Fund where he helped organize the Construction Industry Promotion Trust in 1982. Currently, John is a member of the Audit Committee, Long Range Planning Committee and Political Policies Committee of the California Building Industry Association, a member of the Board of Governors of BIPAC, and a member of the Mayor's Housing Committee in San Diego.

John is a Life Director of the California Building Industry Association. He served as President in 1972-1973. He has chaired the Insurance Committee, Audit Committee and Long-Range Planning Committee. He served the National Association of Home Builders for 12 years as a delegate and as Labor Trustee for six years. He is a Board member of the California Building Industry F foundation. He joined the International Fence Industry Association in 1951. He served on its Education Seminar Team for three years. He chaired the committee to obtain a specialty license for fence contractors.

In his community, John has been a Cub pack leader and a Little League team sponsor for 12 years. He was a member of the Career Counseling Committee representing construction management in the San Diego City schools for three years and he was a Junior Achievement adviser for three years. A charter member of the Old San Diego Kiwanis Club in 1950 and elected Life Member in 1980, he served as its President in 1954. He has 49 years perfect attendance and is still active. A Director of the Cabrillo Medical Center for 22 years, he served as Chairman of the Board for five years through the sale of the hospital. He also served five years as Secretary/Treasurer of the Comprehensive Health Plan Association of San Diego and Imperial Counties and has served as Secretary/Treasurer of the Kiwanis Paper Fund since its beginning in 1972. Active in other business pursuits, John helped organize the Westland Title Company and served as a director for seven years. He helped organize the Women's Bank of San Diego and served as a director for five years until it was sold.