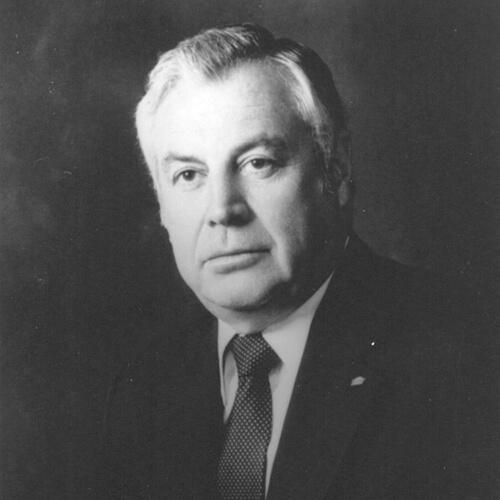 Merrill Butler is a 1948 graduate of the University of Southern California. Merrill is a licensed civil engineer and general building contractor who has constructed over 12,000 residential dwelling units. He is President of Merrill Butler, Inc., a company engaged in building and developing residential income projects.

In 1982, he formed Merrill Butler & Associates, a company which engaged in providing real estate counseling and management services to various financial institutions.

Merrill is also a former Director of Fannie Mae, The Commodore Corporation, and the Advisory Committees of Freddie Mac and the Federal Home Loan Bank Board. He has also served as a member of the Board of Councilors of the USC School of Urban and Regional Planning and a past member of the Los Angeles Chapter of Lambda Alpha, an honorary land economics society.

In 1980, Merrill was the President of the National Association of home Builders. He also served in 1980 as U.S. Delegate to the European Economic Commission of the United Nations. He was named "Builder of the Year" by the Building Industry Association of Southern California (1978) and by Walker & Lee Real Estate (1974 and 1979). In 1981, he was the Southern California City of Hope's Man of the Year and received the Humanitarian Award from the National Conference of Christians and Jews.

Mr. Butler served as an officer in the U.S. Army in both World War II and the Korean War.

​Merrill and his wife, Barbara, reside in Newport Beach. Their three children are married. The Butlers have been active in community affairs, including service on the Board of Trustees of the City of Hope; Executive Committee of the Boy Scouts of America in Orange County; and the 552 Club of Hoag Hospital.