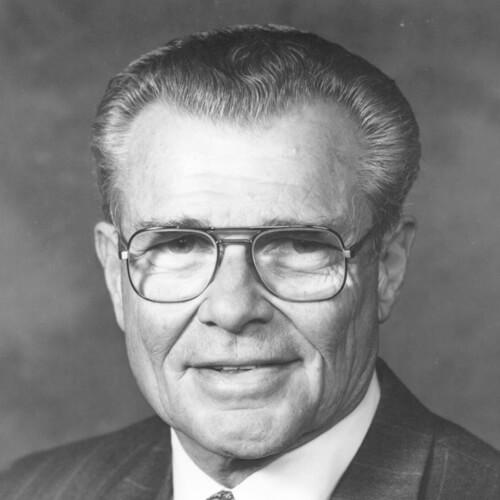 Ronald E. Birtcher entered the real estate development business in 1951, working with his father, Fayette E. Birtcher. In 1967, along with his brother, Arthur B. Birtcher, he became Co- Chairman of Birtcher Enterprises, a family-owned business started in 1939. Ronald oversaw the construction and marketing of more than 40 million square feet.

​As a leader in the real estate industry, Ronald was recognized for creating "tomorrow's buildings today." He was the cornerstone of the company's asset management soundness in joining property and fiscal disciplines to physical and market asset demands. Ronald was known for his design innovations and for developing construction techniques, as seen in his early efforts to introduce concrete tile-up construction in the United States. Ronald maintained business interests in a vineyard in Napa Valley, California; a Protea floral farm in Maui, Hawaii; and a date-farming operation and mail order retail business in California' s Coachella Valley. He was a licensee of the National Football League and creator and owner of the NFL team mascot characters.

Ronald's professional affiliations included membership in the National Association of Industrial and Office Parks and Lambda Alpha International, an honorary land economics society. He served on the boards of the Wellness Community in Orange County, California; Napa County Museum Association; Coachella Valley Counseling Clinic; and Coachella Valley Tomorrow (a Palm Springs area economic development council). He was Chairman of the Advisory Board to the University of California, Irvine, Graduate School of management in Real Estate and a member of UC, Irvine's Board of Visitors.

An active supporter of the Napa Valley Symphony Association and the Napa Valley Opera House, Ronald served as Director and President of the YMCA Camping Association of Orange County; Past President and Elder of the San Juan Capistrano Presbyterian Church; and Past Chairman of the Orange County Sheriffs Association. He was awarded the Developer of the Year Award by the NAIOP in 1989, the Building Association's Medal of Honor in 1988; the Entrepreneur of the Year Award in 1991 from the U.S.-Mexico Foundation; and the 1994 Sumigarden Award.

​A University of Arizona graduate with a degree in Business Administration, Ronald resided in Dana Point, California and Napa Valley, California with his wife, Joanne.