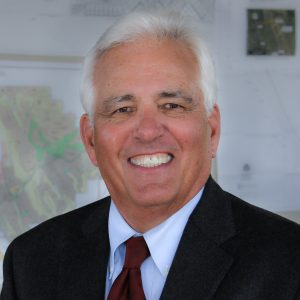 Bill Parker, President of Parker Development Company, has been a developer of luxury, award-winning master-planned communities in the Sacramento area for over 60 years. Under Parker’s leadership, his firm has developed over 13,000 residential units in the highly regarded communities of Greenhaven, Riverlake and River Grove in Sacramento, The Parkway in Folsom, and Serrano in El Dorado Hills. Parker Development Company’s communities are known for their amenities, such as parks, extensive trails & open space, lakes, and golf courses. Bill is involved in every aspect of Company operations, with a particular emphasis on long-range planning, acquisitions, project development and project construction.

Bill grew up in the East Bay and attended San Ramon Valley High School in Danville where he was Student Body President. After graduating in 1969 with a degree in Economics from the University of California, Davis and serving in the Army National Guard, he joined his father, Harold Parker, in the family business. Upon his father’s untimely death in 1976, he took over the family business as President, continuing to develop Greenhaven in the Pocket area of Sacramento with his brothers.

In 1962, the Company was honored to receive the National Association of Home Builders (NAHB) National Community of the Year award for Greenhaven, and 35 years later the Company was honored to receive the same prestigious award for the Serrano community. Serrano has subsequently received more than 75 awards for its high-quality planning, marketing, and the prestigious Serrano Country Club. In 1996 and 1997 Serrano was named Master-Planned Community of the Year by the North State Building Industry Association (NSBIA), and in 1998 The Parkway received the same award.

Parker Development Company has been a member of the BIA since the 1950’s when Bill’s father served as President for the East Bay Homebuilders Association. Bill served on the North State BIA Board of Directors from 1974-1976 and 2003-2005.  In 1992 he served as a member of the State of California Real Estate Advisory Committee. In 1996 he received the Design Excellence Award for Community Design by the American Society of Interior Designers. In 2005 Bill and Sue Parker were awarded the Pax et Bonum Award for extraordinary commitment, generosity, and service to St. Francis High School. Bill received the 2019 Samuel J. Cullers Outstanding Achievement Award from LAMBDA Alpha International for significant contributions to the creation of master-planned communities and accomplishments in land use planning.