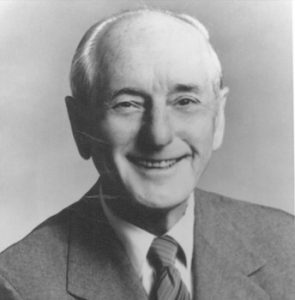 Ernest W. Hahn was a well-known and respected developer of regional shopping centers. He began building his career in 1946 as a general contractor specializing in retail store construction. His firm, a partnership called Hahn-St. John, grew rapidly to become the largest general contractor in the United States specializing in retail store construction. In 1958, Mr. Hahn purchased his partner's interest, and founded Ernest W. Hahn, Inc. Today, the firm is known as The Hahn Company.

In 1967, Hahn opened its first regional center --La Cumbre Plaza in Santa Barbara. Since then, The Hahn Company has developed more than 50 regional centers throughout the United States. It currently operates 53 centers comprising of more than 38 million square feet throughout 18 states. The company enjoys a reputation for being innovative in its approach to development, and is a strong advocate for creating community and cultural facilities in its centers.
In 1980, The Hahn Company was purchased by Trizec Corporation, Ltd., the largest publicly- owned real estate company in North America. Mr. Hahn was Chairman of the Board of The Hahn Company and served on the Board of Directors of Trizec.

Although Mr. Hahn considered himself "semi-retired" he continued to serve the industry and his community alike. He was Chairman of the Center City Planning Committee, where he developed a new master plan for downtown San Diego. He was also on the San Diego Olympic Training Center Task Force and the founding patron of The Hahn Cosmopolitan Theatre in downtown San Diego.

Mr. Hahn was also Executive Vice President and Director of the Bob Hope Cultural Center; Vice Chairman of the California Economic Development Corporation, and former Director of The Enterprise Foundation.

​Within the industry, Mr. Hahn's achievements have been recognized through the Urban Land Institutes Distinguished Developer Award and the Building Industry Association Medal of Honor.