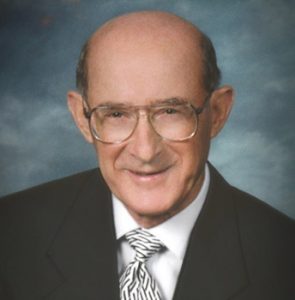 Lester Goodman was born and raised in Chicago, Illinois. He served in the U.S. Army during World War II and was part of the American Offensive during the Battle of the Bulge. Lester attended Northwestern University, earning a degree in Business Administration.

For nearly 50 years, Lester has been a member of his local building association, BIA of Southern California. In the early 1960s, he conceptualized and co-founded the Sales and Marketing Council of Southern California, the first in the nation. He is one of the founding fathers of the National Sales and Marketing Council (NSMC) at NAHB. He has served as a multi-trustee of NSMC and Institute of Residential Marketing (IRM) where he also served as its president. Lester served five years on the Board of Directors for the Pacific Coast Builders Conference, PCBC®.

Lester sits on the Board of Directors for the Southern California Housing Development Corp. and the South Orange County Senior Services, where he serves as fundraising chair for their Meals on Wheels program.

​Lester and his wife, Ruth, have been married for 55 years and reside in Mission Viejo, California.