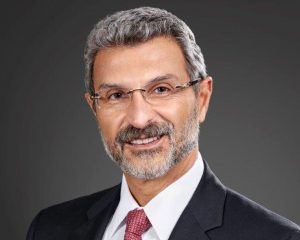 Emile Haddad is Founder and Chairman Emeritus of FivePoint Holdings, LLC (NYSE: FPH). FivePoint, headquartered in Irvine, California, designs and develops large mixed-use communities in Orange County, Los Angeles County and San Francisco County that combine residential, commercial, retail, educational and recreational elements with public amenities, including civic areas for parks and open space. FivePoint’s communities include the Great Park Neighborhoods® in Irvine, Valencia® (formerly known as Newhall Ranch®) in Los Angeles County, and Candlestick® and The San Francisco Shipyard® in the City of San Francisco. These communities are designed to include approximately 40,000 residential homes and approximately 23 million square feet of commercial space. All total, it is projected that these developments will generate approximately 288,000 jobs during construction and $54 billion in activity for the California economy.

Haddad has long been active in the development and homebuilding industries and as a result was named to Gov. Newsom’s statewide Task Force on Business and Jobs Recovery during the Covid-19 induced economic crisis. Also, Haddad is Chair Emeritus of the prestigious USC Lusk School for Real Estate leading several key initiatives to create more housing for all income levels in California.

Haddad most recently served as Chairman and CEO of FivePoint. Prior to founding FivePoint, he was the Chief Investment Officer of Lennar Corporation, one of the nation's leading homebuilders, where he led the company's real estate investments and asset management. Haddad was a founding member of Lennar in California and was instrumental in its growth.